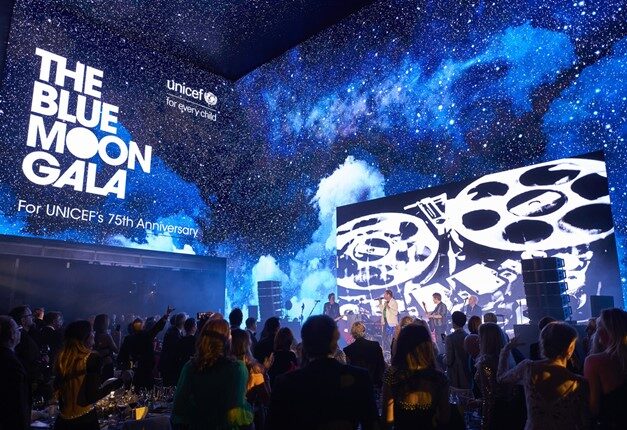 Adot, in Partnership with Outernet London, were delighted to host the star-studded ‘Blue Moon Gala’, which marked the momentous 75th anniversary for leading children’s charity UNICEF.

Presented at London Outernet’s ground-breaking entertainment district, (launching this summer), the occasion celebrated the outstanding work and unstoppable force that is UNICEF. The Gala took time to reflect and honour all those involved in implementing crucial aid to millions of children world-wide, whilst highlighting the power of change through the notion of collaboration.

UNICEF raises funds for emergency and developmental work for children. Keeping children safe is key, alongside promoting and protecting children’s rights both in the UK and internationally. Adot’s charitable foundation was built on the fundamental belief that to achieve global progress we must see beyond the difference that so often separates us- which is why we are exceptionally proud to be part of such a meaningful evening of giving.

For the past 75 years, UNICEF, (born in 1946 out of the ruins of World War Two), has been a huge support system for change, impacting the lives of millions of children globally, allowing them the resources to learn and develop. The charity aims to continue providing for those facing unimaginable crises, from confronting conflict, Covid-19, climate change to the impact of internationally devastating inequality.

Adot were thrilled to be part of this hugely successful evening and help to shine light on a UK charity, entirely funded by supporters. As such, the foundation presented an evening dedicated to raising funds in collaboration with high-profile Supporters, Patrons and Donors.

Live music was staged within the centrepiece of Outernet London’s, ‘The Now Building’. Guests were treated to special live performances from new UNICEF UK Supporter, and double Grammy Award nominee, BRIT Awards and Mercury Prize winning singer Arlo Parks. As well as British music icons, Duran Duran, who performed some of their classics, alongside tracks from their latest album, ‘Future Past’.

Attendees were surrounded with a spectacular ‘Blue Moon’ themed display, which effortlessly glided across Outernet London’s ground-breaking screens, setting the ambience for a star-studded evening. Guests were invited to view footage and images documenting the importance of UNICEF, emphasising the life-changing work they have instilled for children and families globally since its inception 75 years ago.

Adot are delighted to announce that in partnership with Outernet London and UNICEF, we were able to raise £770,000. Funds will aid UNICEF’s on-going work and continue its mission to advocate and create change for children world-wide.

Guests pledged their support at the evening’s live auction, with prize lots including UNICEF UK Ambassador Rita Ora’s sequined Miu Miu bodysuit – (as seen in her Rita Ora Live From the Eiffel Tower film); Andy Murray’s tennis racquet; lunch in London’s Bike Shed which is hosted by UNICEF UK Ambassador Charley Boorman and ‘Long Way Up’  Producer/Director Russ Malkin, all contributing to an outstanding total of £770,000.

Adot believes that we belong to one global, unified group and therefore we proudly support UNICEF as they care for all children in 190 countries with one goal that connects them all: To be safe and protected.

Support UNICEF today to help their work for every child, to build a better world for everyone.